You are here: Home / Cycling / apps / RiderState – a new way to play digital games on your bike.

The simple tagline for RiderState could be “Foursquare for cyclists”. Become the “governor” of specific regions, by being the most frequent rider in each zone. RiderState is another example of how developers are bringing gamification principles to fitness apps. Which basically means that they turn your activity into a sort of game, thus motivating you to want to play again, beat your previous score, build up points towards greater goals, beat other people’s scores, or however the dynamic is set up. The most successful example of the gamification of cycling within the last few years has to be Strava, and given its success, it’s not suprising that others are seeking to create variations on the theme.

RiderState works by chopping the world map up into squares of 10,000 sq metres. Your goal is to dominate as much of the map in your local area as you can, by riding your bike. The game has only just launched (on April 14th 2014), having spent months in a beta phase, with a crowd funding project on indiegogo to get it launched. It seems that they fell way short of their funding goal (getting about a third of what they wanted) but they’ve managed to launch a viable app, albeit a stripped back version compared to what they had hoped to be releasing. Looking on the bright side, this means that the developers have clear ideas of where they want the app to go.

Having just started with the app, I’m definitely the only person in my local area using it, which makes it difficult to determine the criteria for the game dynamics, but that will hopefully become more clear as more users join in.

The app has a nice series of information slides to swipe through, to gently introduce you to the concept. The developers are Spanish, and some of the English translation is a little clunky but it just adds to the charm, in my opinion.

I was excited to use the app for the first time, whilst enjoying a family ride at the Easter break. Just as we set off, I fired up the app, only to be told that as I was is an area with no mobile data signal, I couldn’t log in. This was in a hilly area within mid-Wales. Not exactly a mobile data hotspot! 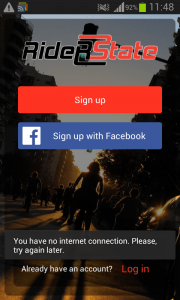 I’m not sure why it’s not possible to record the ride using GPS, and then sync it later, as many other apps do (maybe it is – perhaps I just needed to log in because it was my first time trying to recording a ride with it). I’m not sure how it would deal with losing a signal during a ride. One would hope that you wouldn’t lose all the data. Having used the app for a few days now, I’m pretty sure I must have ridden through some areas with no data connection, and yet the rides have successfully recorded.

Back home, with a decent mobile data connection, I couldn’t resist just a quick little spin around the block to see what the app would do. Here’s what it gave me. Yes, it was just a three minute ride. The lengths we go to, to test apps, eh?

That last screenshot mentioned that I’d ridden through 6 “Lands”. Hmm, ok, I only went around the block. Luckily, the app comes up with some more helpful info screens to help explain.

3 rides to unlock the full menus

After I’d completed 3 separate rides, the full menu options became available, which added to the game dynamic a little bit. Initially, you’re just nudged towards logging some initial rides, after which, they introduce the gaming concept to you. It provides a very simple learning curve, without overwhelming you at any stage. The app has been further designed with gamification principles in mind, and you get nice little motivational alert notifications, and/or reward notifications. 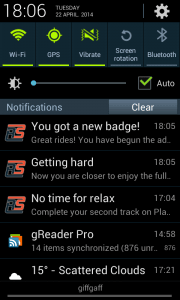 I must be honest, this next little sequence threw me a bit.

As you get into it, RiderState starts to feel like a game, rather than just an app to record rides. It feels like cycling your way through a big strategy board game like Risk. You’re going to consider your route to maximise your domination of the map. This is an interesting contrast to the short, sharp shock provided by Strava segments. Riderstate will reward frequent, high mileage, adventurous riders. As time goes by and other people ride the same roads as you, Riderstate will get interesting. Areas of the map you’ve ridden will be blue. Yellow areas are the domains you’ve conquered. Red areas have been lost to other riders. And presumably, this all changes dynamically according to who’s been out riding today. Once again, the game helpfully introduces the concept with a series of slides.

At this point, the Stats interface expands to show you Leaderboards, Badges, and the RiderState map. 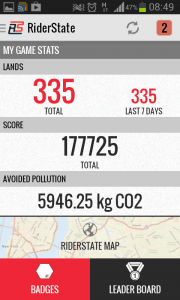 Badges are a great way to gamify the experience. Work towards a specific goal and get awarded the badge on completion of the task. This strategy of marking progress works exceptionally well in modern console games, and a well structured reward system will keep players engaged for months. Hopefully the designers of RiderState have thoughtfully laid out the framework for Badges, so that there are several quick wins initially, building up to intermediate and longer term aims which will take some time and effort to achieve.

Go get ’em all

Newbie. Got to start somewhere…

I’ve written previously about how I think Strava need to adopt a similar strategy of “achievements”, otherwise they’ll face a shelf life whereby people will lose interest in segments once they peak and stop getting any new PB’s. Achievements allow the designers to be extremely creative in crafting multi-layered tiers of attainment. No doubt, some will argue it’s all very silly and childish, but it taps into a basic human desire for progress, whereby regular “rewards” are stepping stones towards bigger goals. It provides additional motivation, that for some people who might be new to cycling and just trying to get fit again, could be the difference between actually getting out or just staying on the sofa.

I might be wrong, but I’m assuming that the middle map below means I’m currently the only person using RiderState in North Wales. It will certainly be an interesting one to watch, and I’m hoping lots of you will sign up and give it a go. I have no vested interest in the product, by the way. Just an appetite for new and fun tech stuff to play with, and to tell you all about it here on the blog. You’ll obviously make up your own mind if RiderState looks like it might be worth your time.

Not sure exactly what the numbers mean…

Is there anybody else out there?

Those 3 yellow zones are MINE

The app also gives you the sort of summary stats you might expect, totalled over the last 7 days. 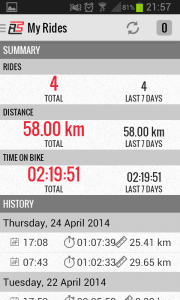 Room in the market for another social cycling app?

Many people may be thinking that if they use Strava already, they’ve got it covered. I think RiderState has been designed so that it’s not going to be seen as a competitor, or an alternative to apps like Strava. It’ll be possible to log rides against both, with a different set of aims within each platform, so it’s possible they’ll complement each other quite nicely.

I record my rides on my Garmin Edge 800, which then get uploaded to Strava when I get home. For the purposes of this review, I’ve also been running the RiderState app on my phone. Whether I’ll continue to do so depends to a large extent on what happens next, and whether it takes off. I’m not sure how a phone would cope with trying to run both the Strava app and RiderState at the same time, and whether the battery would take a significant hit or not.

If you try it out, please tell us in the comments.

Incidentally, I did discover that if you hit your phone’s menu button, whilst looking at an individual ride summary, you do get the option to download a GPX file of the ride. 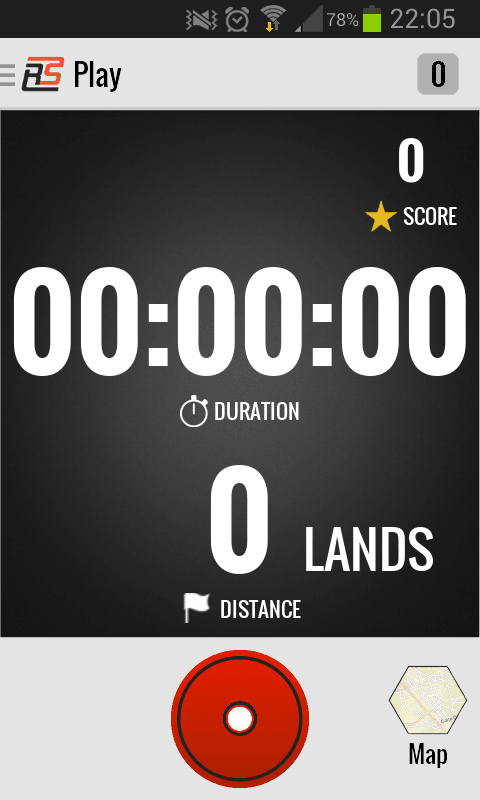 Go get RiderState now, and get ready to hit that big red button.