You are here: Home / Cycling / Getting started with Android apps for cycling (part 1)

Ever since I got back into cycling I’ve wanted a really good app to record my routes and provide basic stats to see how far I went and how fast.  Starting out with little experience, having only used in-car navigation and  an old PDA running windows mobile with some OS mapping for hill walking etc, I was keen to explore a shiny new world of android apps.  Initial research lead me to a brilliant little free app from google, called MyTracks.

The key thing with this app is that it’s basic but reliable, and will record your route and present you with data such as distance travelled, total time, average speed, max speed, elevation gained and more. 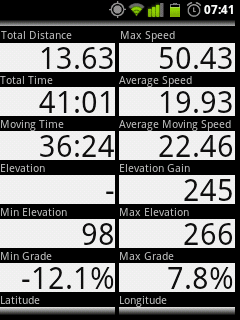 If your battery runs out, the app will resume recording and allow you to save the track when you power up again. It seems to keep recording even if you do other things on your phone, eg take a photo or video. I’ve known other apps fall over if you do dare to do anything like this.
You can easily export your tracks to common formats like gpx. MyTracks is made by Google, so there is good integration with google maps and google docs, for sharing your trails with others or for visualising them later.

To summarise the appeal of MyTracks, it’s a  simple, functional and overall robust little app. It does what it’s supposed to do!

For more about MyTracks, visit the Official page.

Having acquired a taste for this sort of thing, I wanted more. Again I looked around to see what was out there and a friend recommended MapMyRide.

The first thing to say about the android version of the mapmyride app is that it runs like a dog with one leg on my HTC Wildfire. It sucks. It must be quite resource-hungry because you daren’t zoom in on a map or scroll sideways or you’ll be doomed to suffer intolerable lag. Try to take a geo-tagged photo en route and it’s likely to crash. OK, I can hear you thinking what do you expect on a lousy wildfire? Get something with a decent processor. Fair point.

I’ve a friend with the iphone version of the app, and his seems to struggle with maintaining a decent GPS signal, so the recorded tracks are often erratic and inaccurate. The saving grace of mapmyride is the website behind it, but even this is riddled with flaws and clunkiness. It seems quite ambitious in its aims, and the attempts to embed a social aspect are praiseworthy but it falls short by presenting a confusing interface and unnecessary complexity. The one feature that keeps me going back is the ability to plot a route and see the elevation profile, complete with a grading system for the ascents. This is great for planning rides over terrain you’re not familiar with, and can help you to pick out (or avoid!) some tasty climbs.

Since I cannot use the mapmyride app, I tend to record my routes in MyTracks and export to gpx files, which I then import into mapmyride.

This is useful in two ways:

This pattern suited me for a few months, though the gpx export/import gets a bit tedious.

Every now and then however, I’d get lost on a new route and find myself with no internet connection, and hence no map. Lost with no map? Not an ideal situation to be in!
In part 2 of this post, I talk about a couple of apps which give you the power to take offline maps with you.